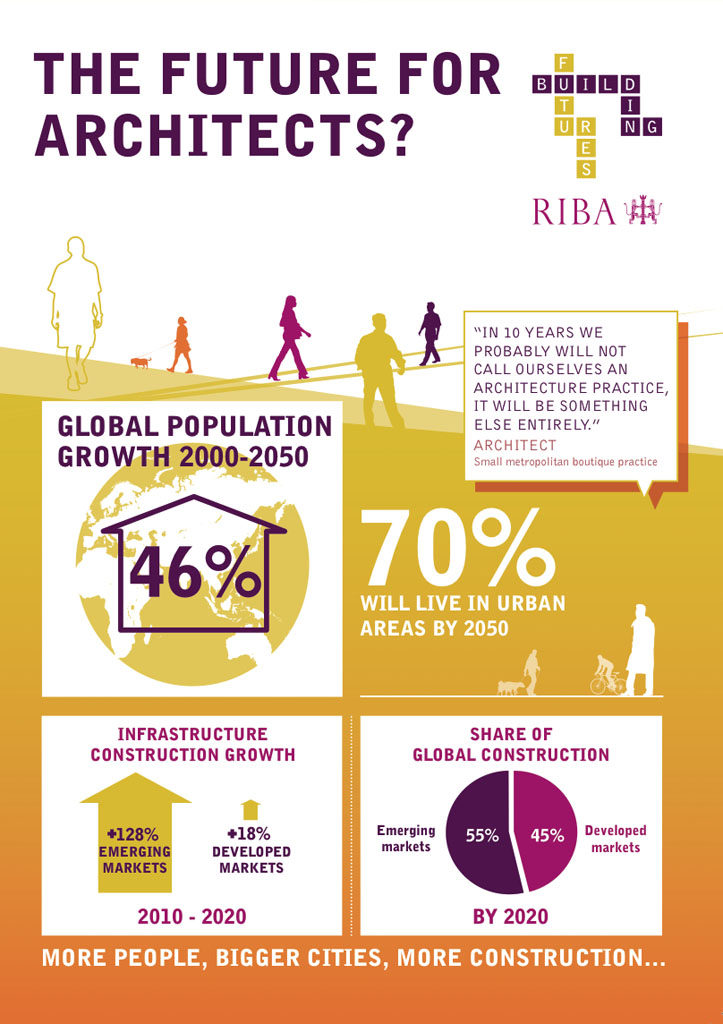 The Future for Architects?

Early last year, the Royal Institute of British Architects’ (RIBA) think tank Building Futures released the results of a year long survey regarding the future for architects over the next 15 to 20 years.  The study is obviously euro-centric and the authors admit that such a study vulnerable to pessimistic outlooks given the context of the current economic recession.  Nevertheless, the report makes for a thought provoking read, albeit a down-beat one.

One of the key concepts raised by the report, and of interest to my current thesis project, is the predicted growth in offices that operate as ‘spatial agencies’ and whose work ‘covers all aspects of spatial production’.  These practices find the term ‘architect’ restrictive as they broaden the scope of their work to include areas of lighting design, product design, industrial design, interior design, installation design, branding and community consultation. This shift in the definition of an architecture practice is symptomatic of the marginalized position of architects within the act of building, both bought upon by themselves and shifts in the construction industry and project procurement.  From the outset, the report acknowledges its predilection for this definition of practice, stating a “clear aim to encompass a broad range of what Tatjana Schneider and Jeremy Till term ‘spatial agencies'”.  The study’s’ methodology is also restrictive, consisting of a limited interview sample; a series of invited roundtable discussions; observations of surroundings; and insights of industry leaders based on experience.  I do not raise these limitations to suggest the findings are useless but simply to emphasise that they are by no means conclusive; as the report states, the study is “intended to provoke and inform debate rather than predict precise futures”.

The professions perceived retreat from the act of building is echoed by interviews conducted with clients and consultants that saw ‘design slipping further down the pecking order’ in  the coming years:

“They justified this on the basis that building technology is becoming increasingly more complex, so much so that design work is increasingly being carried out by subcontractors. The concept of the architect as a technician who composes all the constituent parts of a building that are designed by the subcontractors was widely thought to be a realistic vision of the future. The demand side saw the role of the architect as still important, but as more of a coordinator/manager role, bringing all the parts of the team together. However, they questioned whether this was a role that the contemporary architect would want to do: in their view, it is a role typically taken by the engineer. There was a strong feeling that architects should be learning management skills earlier in the education process, so that they might begin to take these roles on more often. A number of individuals suggested that architects would be best placed to move into new fields of strategic consulting at higher levels, than to try to take back ground that has already been lost.”

Whilst this managerial role would indeed be suited to the ‘design thinking’ skills of an architect, it describes a built environment devoid of architecture. Also, given the previous discussion of architects seeking creative fulfillment outside the act of building, the ‘client and consultant’ group is right to doubt the architects willingness to adopt a managerial role.

There is also a discussion on ARCH Daily that can be accessed here.