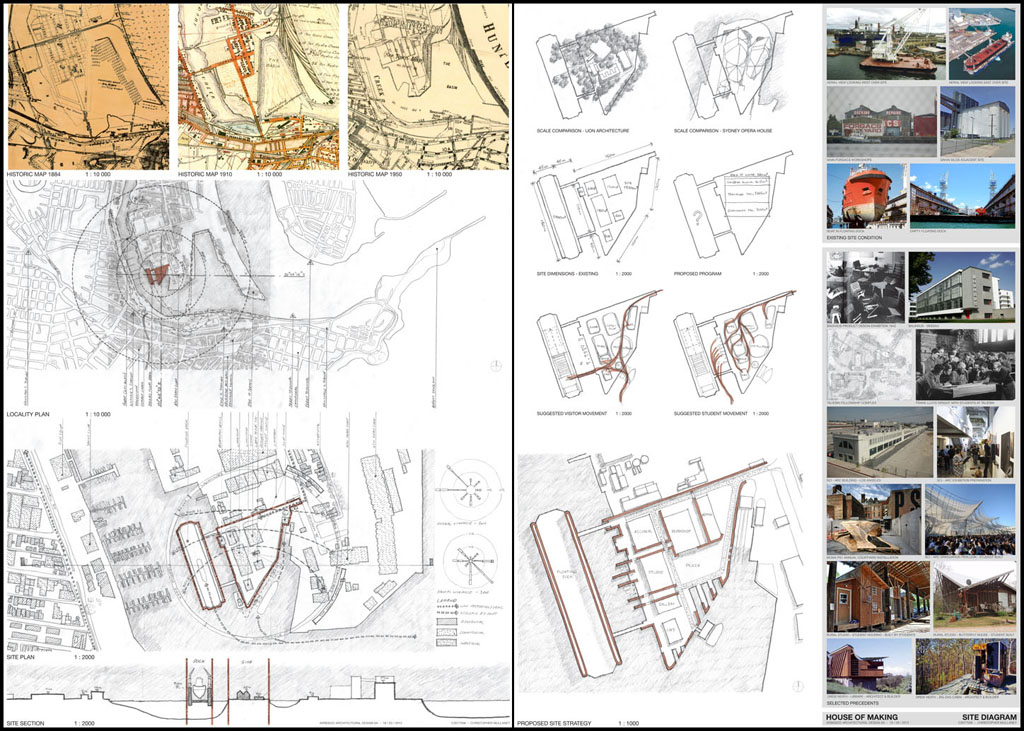 Our final year thesis projects made their first tentative steps today with the presentation of  ‘Site Analysis and Site Diagram’.

Clearly, my commitment to blogging the progress of final year has already been tested in these first chaotic weeks, so this post will begin with a little background.

The course requires each student to develop their own brief and site which they will then develop over the course of a year.  Stripping away all the detailed course criteria, the primary driver for the course is the notion of ‘future thinking’.  Similar to a scholarly dissertation, the brief for each project should develop a critical standpoint in regards to an identified ‘gap’ or train-of-thought in the architectural body of knowledge that requires further exploration.

After weeks of circuitous research, the arrival of the first assignment has finally enforced some direction and led to the proposal for a House of Making that will encompass faculties of architecture and construction, boat and ship building, and industrial design and manufacturing.

The House of Making can be seen as a relative of the Bauhaus School, translated simply as ‘Building House’, or perhaps more accurately as the ‘House of Building’.  Beginning in 1919 under the architect Walter Gropius, the intention of the Bauhaus was to become a combined architecture school, crafts school, and academy of arts where “building is the ultimate goal of all fine art” (although it is interesting to note that no formal architecture program existed at the Bauhaus until the late 1920s).  Although based on a similar pedagogical model, the House of Making will more closely align its architecture school with faculties of construction.

This brief has been developed in response to the recent surge of architectural discourse concerned with the historical, contemporary, and future methods of architectural practice and their role within society and the built environment.

A large catalyst for this debate was the industry report recently released by the RIBA’s Building Futures division regarding the future of architects over the next 25 to 50 years.  In summary, the report suggests that medium sized design-led practices of 30 to 100 staff will be under the greatest pressure, creating a broadening gap between small niche practices and large global interdisciplinary consultancies.  The medium sized practices are predicted to become less viable because they occupy an uneasy middle ground that leaves them too large to survive on small design driven projects, yet unable to compete with large, multidisciplinary firms that are well versed in the commercial language of clients.

At the other end of the spectrum are niche practices that will need to think laterally about their sources of income, operating in additional fields of  “set and stage design, public art, installation design, design of public space, brand design, community consultation, research, think tanks and urban design.”  One architect interviewed for the report  suggested that “In ten years we probably will not call ourselves an architecture practice, it will be something else entirely.”  Many practices interviewed felt that they found the term ‘architect’ restrictive and offered alternative titles such as ‘spatial agencies’ and ‘design houses’.  Meanwhile, clients and consultants presented a much less creative prediction of the architects position in the built environment.  This group suggested that the “concept of the architect as a technician who composes all the constituent parts of a building that are designed by the subcontractors” was a more “realistic vision of the future”. They believe that the architect could continue to play an important role in the industry as a “coordinator / manager […] bringing all parts of the team together”, yet expressed doubt that contemporary architects were willing to fill this role and that it would more likely go to an engineer.

This project focuses on the niche practice of architect / builders: a potential avenue for the future practice of architecture that has been overlooked in many forums, including the RIBA report, despite evidence of a growing interest in this method of work and the surrounding issues of craftsmanship, sustainability, and the importance of a connection between design and making.  It is quite ironic that we now find ourselves referring to this niche of practice as ‘architect / builders’  given that the term architect derives from Latin architectus, itself derived from the Greek arkhitekton (arkhi-, chief + tekton, builder), i.e. chief builder.

The proposed site is the Forgacs Dockyard at Carrington, including the floating dock that has been in mothballs since 2010.  Located on the northern shore of Newcastle harbour, the site enables the school to have a strong presence in the city in addition to providing sufficient space for the schools large program and a suitable industrial context that will not be adversely affected by the addition of fabrication workshops.

The Aboriginal people knew this area of Newcastle as the place of the mud crab “wuna-r-tee” and early land use by the Aboriginals was for fishing and gathering oysters and mud crabs.

The location also has a rich history as a place of ‘making’ on a number of thematic levels. Carrington can be seen as a testament to the white settlers need to reshape environment. Originally the island was underwater at high tide and was slowly built up by ships dumping ballast and other reclamation work, which eventually saw the island grow out of the mud, as seen in the historical maps below.  This was a radical counterpoint to the Aboriginal peoples ability to live in harmony with the mud flat environment prior to white settlement.

This project will explore the importance of making in relation to the history of the site and architectural education and practice. 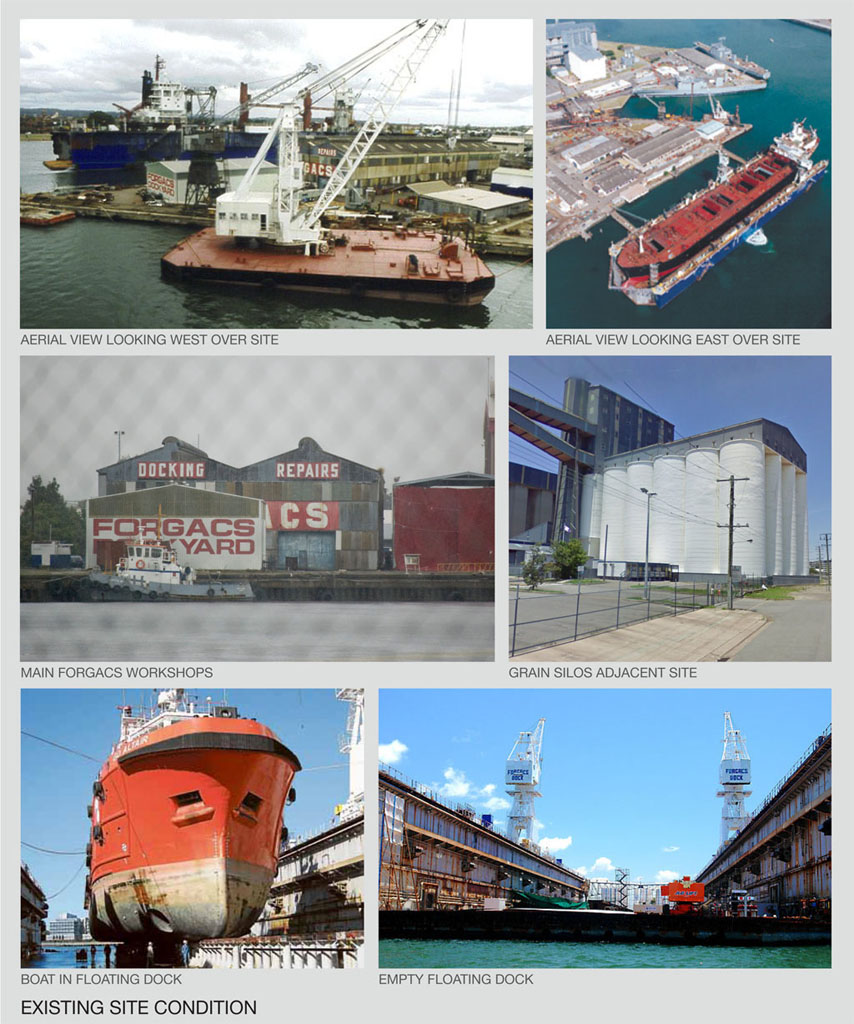