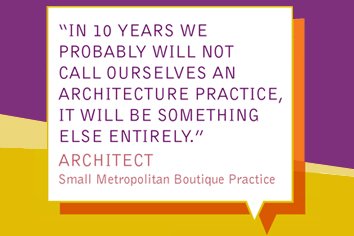 Architecture Australia recently held a round table discussion in Sydney on the topic of ‘risk’ in architecture.  The transcript published in the January / February issue of AA provides some provocative opinions on questions that I am currently grappling with in my 5th year project. I particularly like Timothy Hill’s response to the idea that (ironically) the title of ‘architect’ is holding the profession back – a concept that was raised in the “Designing the Future” produced by RIBA earlier this year.

Question – Anthony Burke:  I’m Anthony Burke, the Head of the School of Architecture here at UTS. One of the recommendations from the RIBA “Designing the Future” report earlier this year was that actually the title, architect, will have no relevance in the future. I wonder what the panel’s opinion is about whether that would be the best risk we could possibly take as a profession, to get rid of the title of architect altogether?

Answer – Timothy Hill:  Architect is a great term and I wish architects would conduct themselves the way the media understands the term. The term architect is used seven or eight times everyday in print publication. Yesterday, the papers came out revealing the real architects of the carbon tax. That’s because the public all understand that what architects do is to rationally organise, in difficult situations with possibly contentious results, to actually make a new reality, and then are able to communicate it to people along the way who might either be resistant or need to be reorganised. Now, that took me an entire paragraph, but people who read any form of newspaper, however tabloid, understand that whole spectrum of what the architect’s role is, because they are endlessly calling brilliant football coaches, and people who bring about carbon taxes or changes to legislation, architects. These people are called architects by the media because the media, and people who read it, understand that there is a particular business of looking at something that’s complicated, being lateral about it, involving a whole lot of other people. That’s a reasonably commendable thing, so they give it a word. Now, what’s interesting when they use the word is that the person is given the title “architect” not because they are powerful; they’r given it because they’re smart. That’s why I think it’s very important for our profession to get on with the business of admitting that we have no power, and just show that we’ve got the smarts. The media are using the term in a way that’s far ahead of the way our profession knows. Keep it.